As per new reports, Samsung Galaxy Note 9 is releasing on August 9, 2018, at the Galaxy Unpacked event. Samsung has sent out invitations for the event to be held in the New York City on August 9th. Previously Samsung announced Note 8 on August 23rd and Note 7 on August 2nd, so the timing fits.

The invitation that is sent by Samsung displays a picture of a yellow handset equipped with a large button. 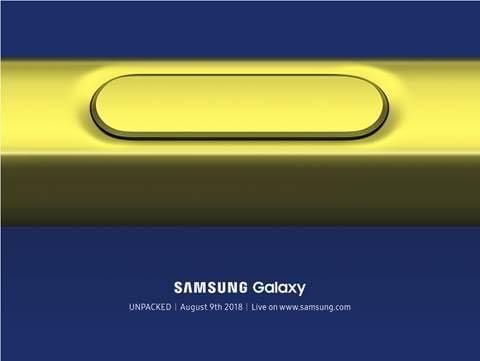 Underneath the picture, there is written “Samsung Galaxy” and “Unpacked”  and the date ‘’August 9, 2018’.

Earlier Samsung confirmed that Samsung said that it started working on Note 9 immediately after completing Note 8 ‘considering how to approach the development of the next Note by evaluating the latest model and looking for ways to improve upon signature features like the S Pen.’

It is expected that Samsung will offer almost an all screen phone, reducing the bezel further. The design of the phone will be the same as that of Samsung Galaxy Note 8. The processor of the phone might be upgraded to Snapdragon 845.

Also, chances are that Samsung will retain its fingerprint sensor feature even though many smartphone makers are ditching it.

The camera of the phone will be dual-lens providing amazing features like low-light image capture and improved depth-of-field.

Another feature expected in Samsung Note 9 is a major storage boost to 512GB. It was reported that 512GB  variant of the phone will be available in some regions including China and South Korea. Later it might be launched worldwide.

Two variants of the phone are expected 6GB RAM, and 8 GB RAM with Android Oreo 8.1. The battery of Samsung Galaxy Note 9 will be 4000mAh.

Price of the phone is expected to be around £800 to £1,000 depending upon the model of the phone.