Toyota revealed Toyota Camry 2018 at 2017 New York International Autoshow. Camry is famous for its popular family sedans all over the globe. Now Toyota has unveiled a D-Segment sedan for its Japnese local market. The reports suggest that this new model would give tough competition to the US-version in its features, design, elements and tech gadgets. 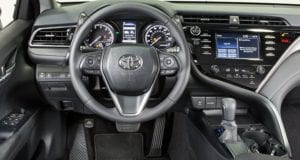 Similar to the US version JDM model has an intense look design which gives Sedan a  daring appearance from both front and rear. Looking into its features the car has slim headlights, an unflinching grill and extensive air intakes which go along the width of the front bumper. This gives the car a distinctive look.

Toyota Camry has less ride height in comparison to the recent models but the unique aspect is its C-pillar which joins the top part of the trunk lid.

It is expected that the car will be released in TRD and Modellista body packages. TRD will feature a lean sporty look might extend sports bumper by integrating LED DRL, innovative side skirts, and low profile blends. On the other hand, Modellista is expected to come with a more delicate, elusive body kit emphasized with unique front apron, distinct alloy wheels and fresh side skirts.

Also, the Japanese style of Toyota Camry 2018 will come in three powertrains that are petrol, diesel, and hybrid.

Now the car does look inspired from Maserati Aston Martin Touch from the back but even that inspiration is blended with originality.

The only point of concern would be the price. Let’s hope it is reasonable if not affordable.

Sindh Govt. to Reopen Schools Despite the Warning of the Health Minister