Summer Vacation Holidays have been extended in KPK and a few schools of Punjab.

Schools in KPK were expected to re-open on 1st August but due to severe heat Summer Vacation holidays have been extended. The schools will now open on 15th August in KPK. Caretaker CM KP Former Justice Dost Muhammad Khan took this decision. As there has been a constant increase in heat & humidity and students were facing problems due to it the Caretaker CM KPK made the announcement to extend summer vacation holidays by 10 days. 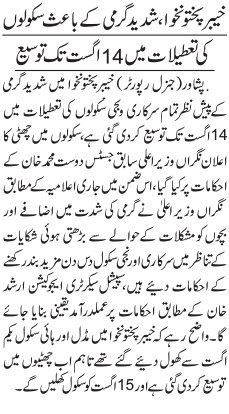 Now in Punjab, the announcement was that schools will re-open by 6th or 13th August but many schools have made the announcement that they will reopen after Eid-ul-Azha. As there will be a holiday on 14th August and then almost a week-long holiday for Eid, few of the schools have decided to extend the summer vacation holidays.

Interesting: All upcoming holidays in Pakistan in 2018

Attention PlzSummer Vacations for Junior Section of Fazaia Schools and Colleges has been extended until 12 August,…

It is pertinent to mention here that in Punjab there has been no official announcement relating to the extension of summer holidays. Only a few schools have extended it. But in KPK the government has officially announced extension till 14th August, thus all schools will remain close in KPK till that time.

Earlier Summer Vacations holidays were extended till 31st July in Sindh due to elections and unbearable heat in the province. Sindh Education department made the decision to provide relief to the students.

OPPO is expected to roll out the new Enco Buds by the end of this month. These earbuds are similar to the Samsung Galaxy Buds+...

Android 12 to translate apps into your native language

We already have Google Translate and other similar apps. But none is comparable with the features coming with Android 12. This time Google is working...

If several large chip manufacturers have their way, the massive bottlenecks in the industry will not change in the coming months. TSMC, Intel and Nvidia believe that...

Realme is likely to bring a new smartphone, the Realme Q3, to China. One of the unique features of this device is that it glows...

In the future, the computer and mobile company Apple not only wants to ensure that its activities cause less damage to the climate but also want to make a...

Android 12 to translate apps into your native language

Clock Battery Inside PS3 And PS4 Are Creating Problems