Qualcomm appears to be testing its new SoC, the chip appeared on Geekbench today, and the chip has been tested on the platform with an unknown device.

Earlier this year, Qualcomm has released a powerful SoC SD 845 which powers virtually all top-tier Android devices, however, the SoC has lost its popularity after Huawei has unveiled Kirin 980 SoC, the latter is yet to debut this year most probably with Huawei Mate 20 smartphone.

However, Qualcomm’s SD 845 chip is still Qualcomm’s best and the latest chip on the market and tons of new midrange and premium handsets are powered by it but Qualcomm has been testing the new SD855 also known as 8150. This is not clear that with what device the company has tested the new chip but it was running on Android 9.0 Pie with 6GB RAM.

The results are impressive and outperforming Qualcomm’s previous chips, the single core score is 3697 which is well below than Apple’s last year’s A11 chip. The multi-core score was recorded at 10,469. Apple is ready to unveil its new product line of smartphones and A12 SoC on September 12.

Qualcomm’s SD 855 might be left behind again by Apple’s A12 SoC as its previous SD 845 chip was outperformed by Apple’s A11 SoC. Similarly, if Huawei’s Kirin 980 also beats Qualcomm SD855 then Qualcomm seriously needs to think about the future strategy of its SoCs. 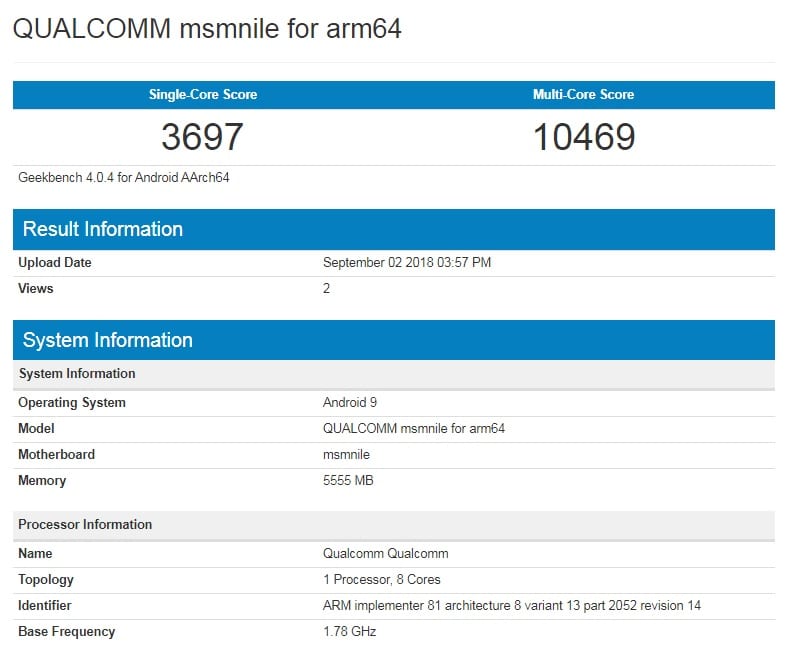 Vivo Could be Bringing a New Vivo Y55s on Dec 4th