The project is termed as the “Web Management Solution (WMS)” and the proposal request for the making of the system has already been given.

Pakistan Telecommunication Authority is looking for interested parties that could develop the WMS via the hardware, software and the middleware so that it could detect and prevent the access to the online content and websites that are deemed illegal or unlawful under the Pakistan Electronic Crime Act (PECA). 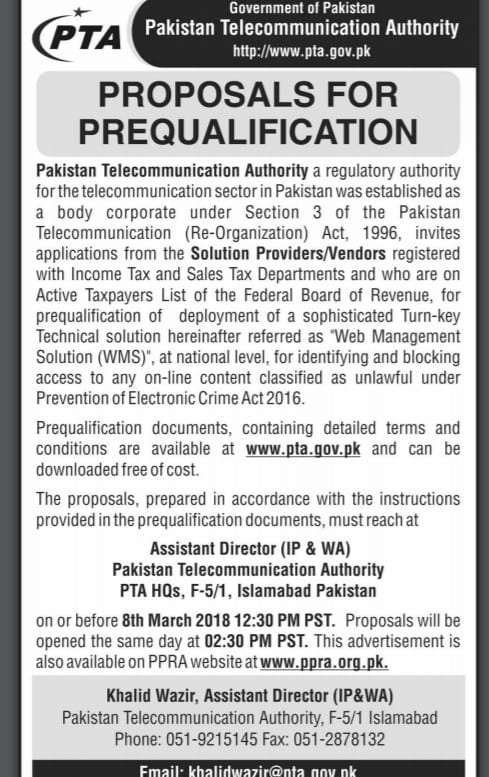 Relating the details of the functions of the WMS, the Web Management Solution is needed to block the delivery of the illegal content in such pattern that only that specific content gets blocked or restricted out, while the remaining content on the website or server or domain stays accessible like before.

Also Read: Pakistan to Surpass India in The Launch of 5G Internet Technology—PTA

The firewall is planned to work like a “crawler”—a program that searches the World Wide Web (WWW) in a methodical pattern and as it is equipped with self-learning algorithms it identifies and classifies the sensitive material that is available online.

Additionally, the firewall is schemed for providing real-time traffic analysis to automatically identify the objectionable content and block it from the public viewing. The WMS would also be having the ability to detect the IP addresses of the ones trying to access to the illegal content and then would show them warnings.

The WMS would also be able to give reports relating identification and blockages, along with the nationwide statistics about the website—which means how many times a website is accessed, the number of sessions, etc.

Moreover, PTA has drafted a plan for providing training to the assigned Human Resource Staff for managing the hardware and software operation of the Web Management Solutions.

It is worth mentioning that this is not the first time that the government has decided to make a firewall at a national level. Back in 2012, the government planned to make a National URL Blocking and Filtering System. But, because of some reasons, the project faced strict criticism from the internet and the associations of human rights which finally led to the project termination.

As mentioned earlier, Pakistan Telecommunication Authority still requires the service providers that would be creating the entire system, with the needed functions. The moment the team is found, the national firewall’s development would begin.

Uber Announces To Go All-Electric By 2040

Realme has launched the C12 earlier in August. The company is now all set to further expand its C series with the launch of Realme...

Saddar Karachi, The Highest Tax-Paying Market of the Country

Clinical Trials for COVID-19 Vaccine to Begin in Pakistan

Islamabad Ranks 7th amongst most polluted cities in Pakistan