There are many rumors around for the next upcoming flagship of Oppo, the new Oppo Find X which is going to succeed the Oppo Find 7, but now the rumored device has appeared again with some interesting features, Oppo has already sent out some teaser hints for the device.

However, Oppo itself didn’t reveal much about the device but a new leak surfaced from China plays its part. There are no visual leaks at the moment but the internal specifications are unveiled in this leak, the leak suggests that the device belongs to the premium smartphone segment in the market.

There is no evidence of the notch, whether the phone will have a notch or not is still doubtful, secondly, it is not clear also the phone will have a full bezel-less design. It is just a matter of days to know the exact screen, size display, and design but whats inside is more important for now. The leak suggests that Oppo Find X will have Snapdragon 845 64-bit Octa-core SoC under the hood coupled with 8GB RAM and 256GB of internal storage. Pretty large specs are to attract the premium market segment for sure.

Oppo beats all the brands during the first quarter

Inspired by the name of iPhone X, the Find X will carry a huge battery as well; the phone with 4000mAh battery will also support Super VOOC fast charging technology, some rumors also suggest that it will serve Android P out of the box, but the latest updates say otherwise, because the device will be launched way before the actual launch of Android OS next month.

The price of Oppo Find X is not confirmed yet, but it is more likely to fall into the category of premium handsets which would not be less than $900. 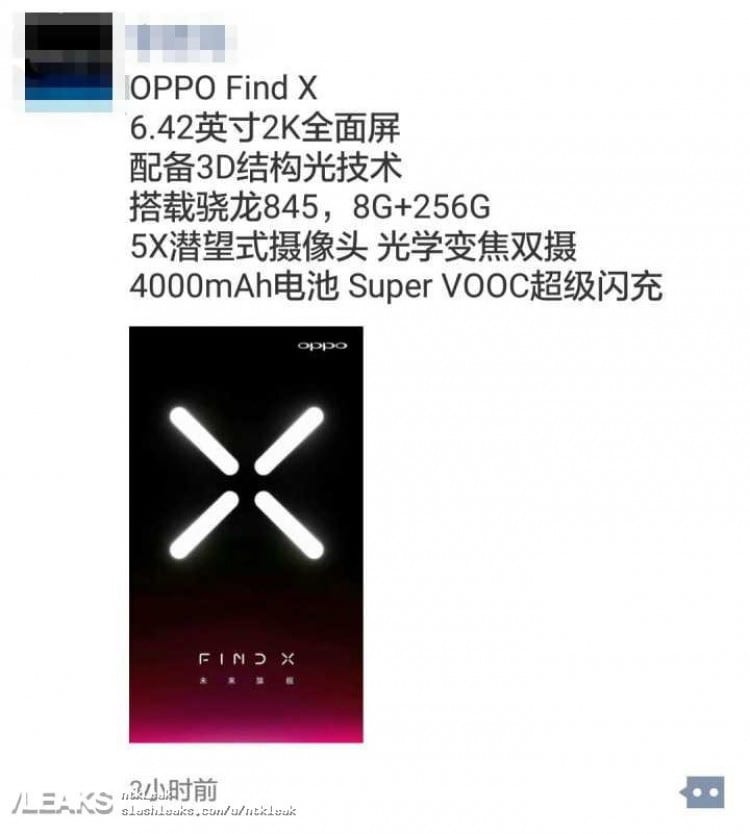 YouTube Music Replaces Google Play Music By The End Of 2020

U.S Dollar surges to Rs.168 against the Pak Rupee

Pakistan pays back $1b loan to Saudi Arabia

PIA to Resume Flight Operations to the UK from August 14

PIA announced an increase in the compensation for plane crash victims