Audi has started throwing its vehicles in Pakistani market, since Audi presented a proposal to the Board Of Investment Pakistan to start assembling plants in Pakistan. Which BOI rejected because it was lacking in comprehensive plan, BOI asked Audi to resubmit proposal which is now underway. It now seems that Audi has already made plans for Pakistani market and announced on their Facebook page that Audi is launching Q2 model Hatchback soon in Pakistan. 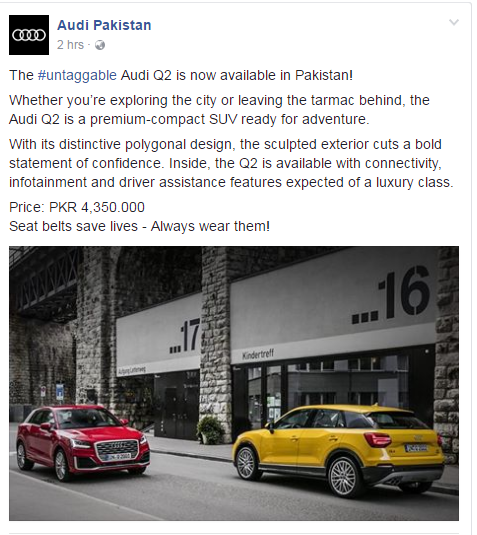 Audi Pakistan has now developed Q2 to target younger demographics than its bigger variant Q3. As Q2 is compact and hatch backed it might appeal the larger segment. The new Q2 is ready to compete various rivals, including the new born BMW X1. This car is on sale and comes in three varieties; the entry-level SE model, S line model and a limited-edition # 1 model. The model comes with the following engine variations:

However, some sources revealed that Audi might be introducing this crossover with 1.0 Liter Turbocharged 3-Cylinder Engine, which will be benefiting a lot from the Import, Registration & Taxation in Pakistan, obviously while saving costs it will also allow the company to offer this vehicle at highly competitive price.

The CUV is estimated to come with the price between 2.7-3.0 million.