Motorola is coming with its new flagships E-series and G-series, it’s been talked for weeks now, The Moto E5 appeared on Geekbench last week with the information on major specifications, now it has come with some renders to show you the phone’s appearance and design.

The rear camera looks quite different what we normally see on the other phones, the build quality looks great, the front screen has curved edges and probably an aspect ratio of 18:9.

The frame looks to be made out of metal, the back is quite glossy could either be a plastic or glass. At the back, it seems like a dual camera set up but it’s actually not, however, it has two camera lens slots one contains camera lens but the other one seems to have sensors.

Just below the camera set up, there is a moto logo which can accommodate a fingerprint scanner in it. There are two colors shown in the images, Gold, and Black so Moto E5 Plus smartphone might be available only in two colors.

For the detailed specifications and updates stay connected and wait for the newer leaks. 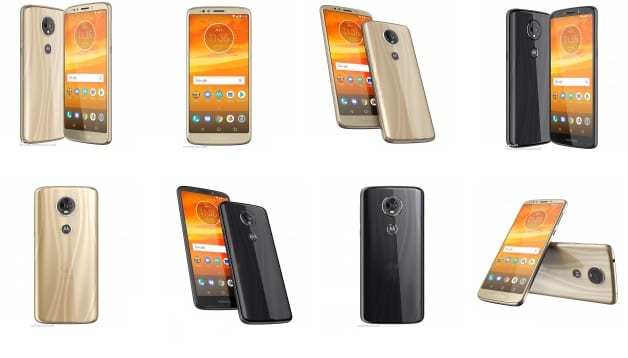