Deciding the market and industry for startups is quite a difficult task, you may have expertise and ideas for various markets but deciding which market would yield favorable results for you becomes quite difficult.

However, Cloud infrastructure market is one of the markets which is growing fast over the past few years, it is always better to analyze the current market situation, growth rate, and future potential before jumping into the market.

In this article, I will provide you some insights for Cloud Infrastructure Market (CIM) that might be useful for your future plans. According to the data analyzed by Canalys, the global cloud infrastructure market saw an increase of 46% year-on-year during the fourth quarter of 2017 and reaches the US $16 billion, and the full 2017 year growth was 45 percent. The market sounds quite lucrative, Amazon Web Services (AWS) is leading the market in the fourth quarter of 2017 which covers 32% of the total market globally.

Besides Amazon, Microsoft, Google, and IBM are the big stakeholders in cloud services market accounting for 14 percent, 8 percent and 4 percent of the market share respectively. As far as performance is concerned Microsoft is the top performer during the 4th Quarter 98 percent up while Google was 85 percent up, AWS was 45 percent up and IBM was 9 percent up.

By looking at the stats the market looks very lucrative for startups but the major obstacle is the competition, you will have to compete big tech companies in order to qualify for the market share and growth. However, there are still gaps in the cloud infrastructure market, the services these giants are provided can be broken down into various categories and with innovative offerings, you can make your position in the market. 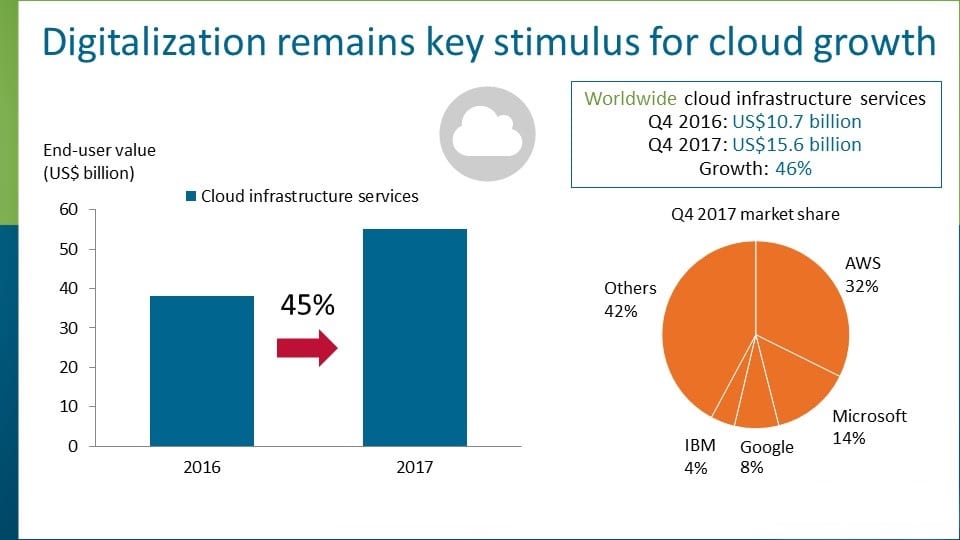 According to the data, the market growth might be slow down in 2018 and that is not affected by supply and demand, it might be affected by security and data protection. Still, the market is expected to grow at 36 percent during 2018.

The growth is affected due to increasing costs for vendors, security vulnerabilities, hardware-based meltdown and Spectre flaws. All this could lead to sensitive users data stolen from the shared cloud infrastructure, says research analyst Daniel Liu. He further said, companies have to invest more in data protection, security, hardware upgrades and compliance with the changing laws on data protection and security put more stress and expense on the companies.

However, the market is still in growth mode, we might expect new startups, companies joining the market during 2018-19.