Healthy competition is always encouraged, but blindly doing all that is possible to get better than the other, you will soon find yourself in a pit.

This is what happened recently with Careem. The competition between Careem and Uber is not new but this is. People have not forgotten the “Rishta Aunty Service” by Careem, that it makes yet another blunder.

Careem announced that their service is offering 20% off on Pizza Hut Menu.

Pizza Hut had no idea about this offer.

The discount offer was without the consent or approval of Pizza Hut. An awkward situation was created between Pizza Hut and Careem.

The message from Careem read that those people who took a ride on Careem in last two days would have 20% discount from Pizza Hut. The riders could get a discount by showing e-receipt and it is allowed from 24th July to 24th August. It was a very tempting offer by Careem. The only fault in it was that the management forgot to ask Pizza Hut about the discount before making the offer.

The deal was also posted on Facebook but was later deleted. We do have an image of it. 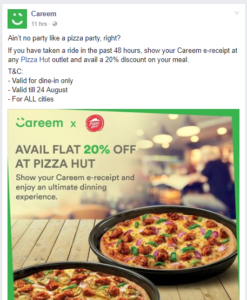 The response on this offer by Pizza Hut was quite to the point and straight. They completely disowned any such offer and also clearly stated that those using their name for such offers legal action would be taken against them. Also, it was indicated that this is a complete mismanagement by Careem Cab Service.

Just a few minutes ago Careem has posted on Facebook saying that their collaboration with PizzaHut (if it ever existed) is no longer in effect.

Our campaign with Pizza hut is no longer in effect due to an unfortunate communication lapse. Rest assured, that we will be bringing you amazing discounted deals very soon. We regret any inconvenience caused.