Most of us are aware of the controversy between Ali Zafar and Meesha Shafi. Shafi accused Ali Zafar of sexually harassing her and Ali Zafar replied to it saying that the accusations will be dealt in the court. Since then many celebrities have come forward taking sides of one or the other, from Maya Ali to Urwa Hocane, Hamza Ali Abbasi, Armeena Khan, Ayesha Omar and Osman Khalid Butt.

But there has been quite a silence on all social media accounts of Ali Zafar. He did made a promotional post of his upcoming film ‘Teefa in Trouble’ but nothing personal.

Also read: Ali Zafar will not judge Pepsi Battle of the Bands

Now Ali Zafar has posted a video of him performing a piano version of one of his most favorite song ‘Chal Dil Merey.’ The song has a line ‘Ya dunya jhooti, log luteray’ which means that this world is full of liars and cheaters. People feel that this line is subtly directed towards Meesha Shafi.

Here is what people are saying on Ali Zafar’s post

‘Must be Singing for Meesha’

So if this comment is believed Meesha Shafi is in the video. 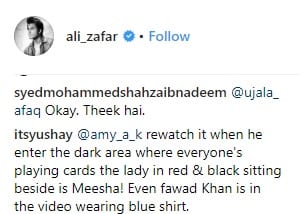 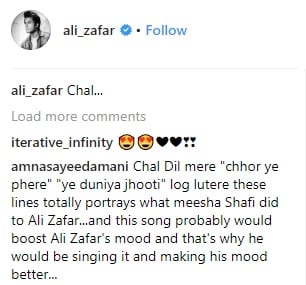 ‘Song Dedicated to Meesha Shafi’ as per a fan comment. 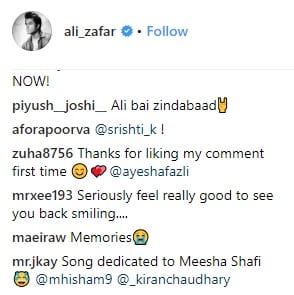 We don’t know whether the song was posted just for fun or it was directed towards Meesha but we do think that the song is relatable and it is sung beautifully.

A Petition Filed Against TikTok In Peshawar High Court

The upcoming OnePlus 8T has now shown itself for the first time on the Geekbench benchmark, with 12GB RAM and Snapdragon 865. The new flagship got 3,843...

As the company is launching more and more devices with a great camera and internal specifications the company has now reduced the price of Realme...

Apple has released a new pre-release version for developers, iOS 14.2. The update should also start in the public test program shortly. New in 14.2 is a new corona...

WhatsApp New Interface To Monitor Memory Use Shows Up In Beta

WhatsApp has just received a new update aimed at the Android app in beta. The update introduces a novelty that emerged in a previous teardown and involves a specific section of the app settings....

WhatsApp New Interface To Monitor Memory Use Shows Up In Beta